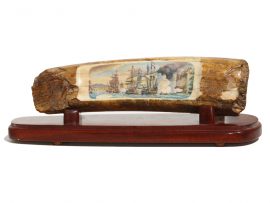 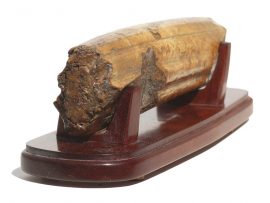 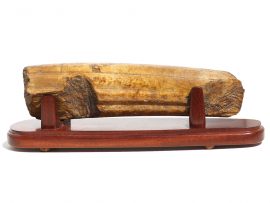 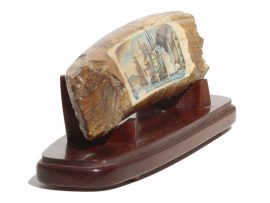 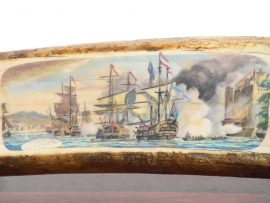 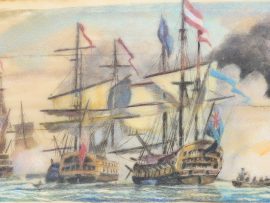 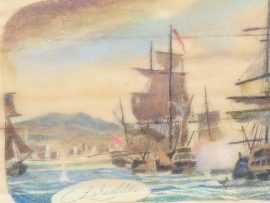 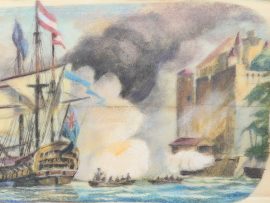 “Battle of Porto Bello” color scrimshaw on ancient walrus tusk artifact by Chris Lehwalder. Rare ivory used as ice axe by ancient people in the Northern Bering sea area hundreds of years ago. This is an impressive ice axe weighing 3 lbs., 3.3 oz.! Lehwalder, one of the best known color nautical scrimshanders ever, has created a gem. Note the detail in the British ships and the copious amount of heavy smoke billowing from the Spanish stronghold. Nice touch with the smoke in the upper right hand corner of the ice axe. This was an actual battle. Following describes the scene (taken from the internet).

The Capture of Puerto Bello, 21 November 1739
The capture of Porto Bello (properly Puerto Bello) was part of a campaign known as ‘The War of Jenkins’ Ear’, which was fought against Spain in the West Indian colonies and was in effect an early stage of the War of the Austrian Succession, 1740-48. When Robert Jenkins, a merchant sea captain, had his ear cut off by a Spanish officer at Havana in 1731 it led to calls in Parliament for war with Spain. During a House of Commons debate in the summer of 1739, Captain Edward Vernon claimed he could take the Spanish town of Porto Bello – a source of Spanish depredation on British shipping on the north side of the Isthmus of Darien between Columbia and Panama – with only six ships of the line. He was promoted to vice-admiral and given the six ships so that he could carry out his promise. These were the ‘Burford’, Vernon’s flagship, and the ‘Hampton Court’, both of 70 guns; the ‘Worcester’, ‘Strafford’ and ‘Princess Louisa’, all of 60 guns, and the ‘Norwich’, 50 guns. Vernon’s squadron sighted Porto Bello on the night of 20 November 1739. The main obstacle to overcome was the Iron Castle, or ‘Castillo de Ferro’, at the northern entrance to the harbour, which they attacked at 2.00 p.m. on 21 November and a ferocious battle ensued. When the enemy fire gradually lessened, Vernon signalled for his manned boats to land beneath the walls of the castle. On the morning of 22 November the Spanish governor, Don Francisco Martinez de Retez, sent a flag of truce and accepted the Vice-Admiral’s terms of surrender. Public money found in the garrison was distributed by Vernon among his men and the fortifications were then demolished. The surrender terms stated that Vernon received shipping and ten thousand dollars from the treasury as well as brass ordnance. He was also successful in demanding from Panama the release of some South Sea Company men who were imprisoned there. 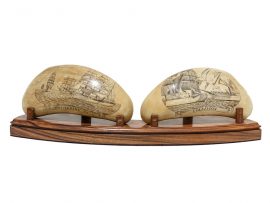 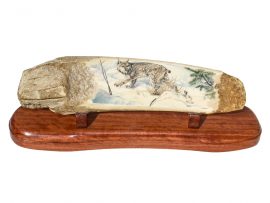 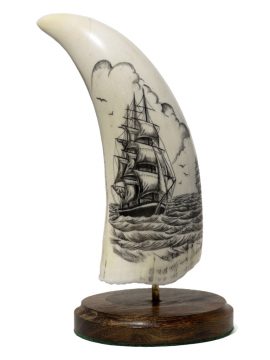