Graveyard of the Atlantic

“Graveyard of the Atlantic” black and white scrimshaw on ancient walrus tusk ivory artifact by Salman Rashidi. Stunning artifact used as an ice tester hundreds of years past by natives in the Northern Bering Sea area. Don’t comer across many this nice. Mounted on a handsome stand of cocobolo and mammoth tusk ivory, this would be a fine addition to any scrimshaw collection.

The Cape Hatteras Lighthouse protects one of the most hazardous sections of the Atlantic Coast. Offshore of Cape Hatteras, the Gulf Stream collides with the Virginia Drift, a branch of the Labrador Current from Canada. This current forces southbound ships into a dangerous twelve-mile long sandbar called Diamond Shoals. Hundreds and possibly thousands of shipwrecks in this area have given it the reputation as the Graveyard of the Atlantic. 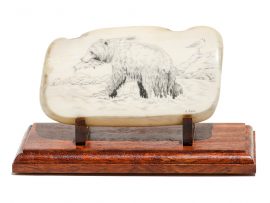 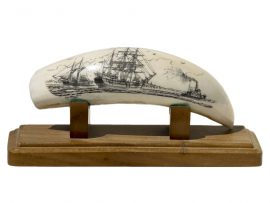 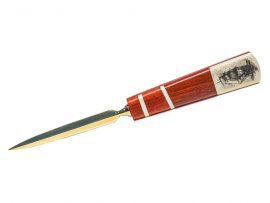